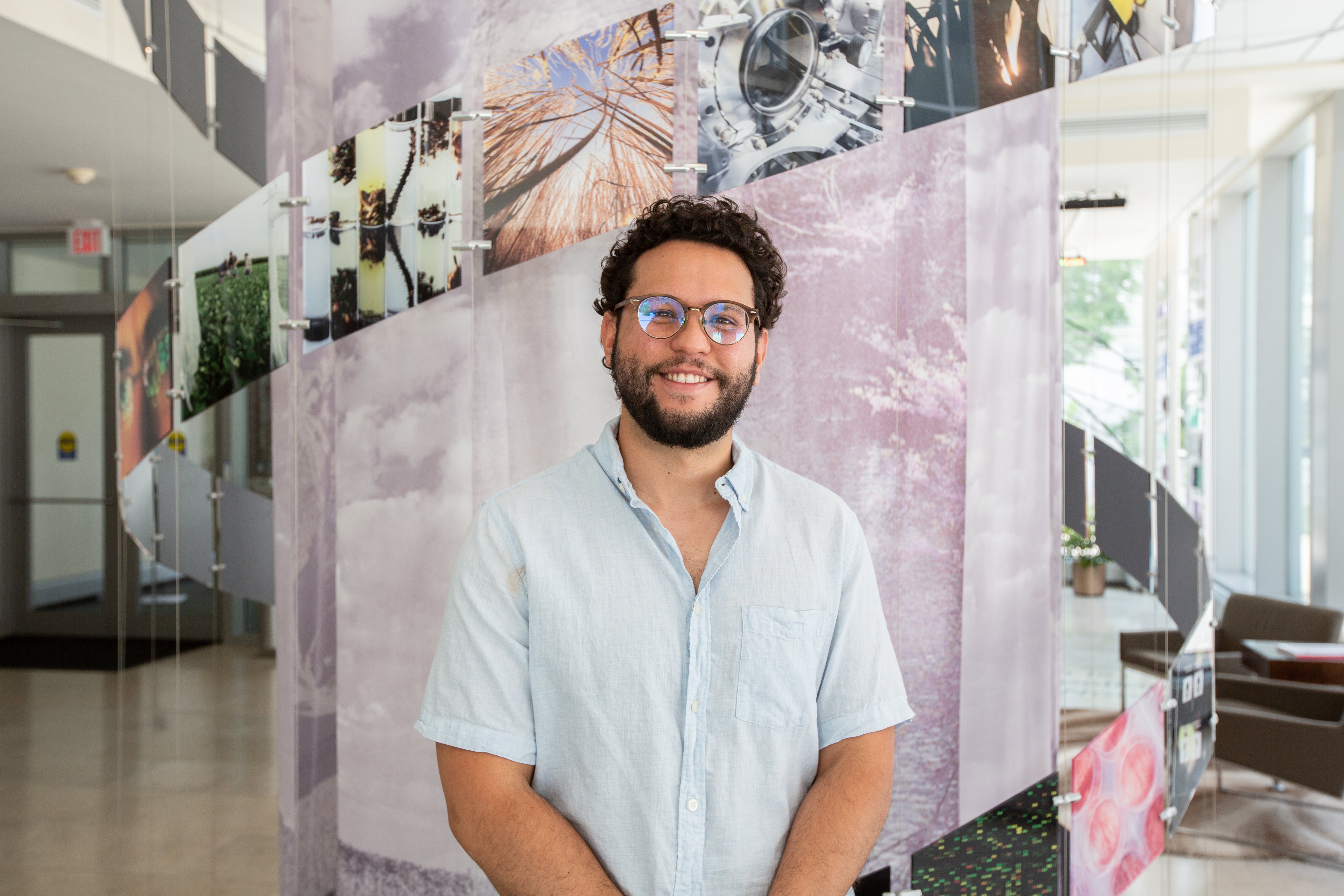 Even in the most extreme locations, life can thrive. Microbes called thermophiles are able to colonize environments that are extremely hot, with temperatures above 75 °C (167 °F), and acidity of 3.5 pH or lower. Ruben Sanchez-Nieves, a 6th year PhD candidate in the lab of Rachel Whitaker (IGOH), a professor of microbiology, studies the genomics and evolution of these unique organisms to better understand how they are able to survive in such intense conditions.

“The diversity of microbes is amazing,” said Sanchez-Nieves. “For example, there are microbes that can literally breathe iron instead of air. And then the broad range of where you find them — in our gut, on our skin, in hot springs, in the depths of the sea...they’re basically everywhere. They colonize any environment that has water on Earth. And I wanted to know, at a molecular level, how life can take so many forms.”

Sanchez-Nieves grew up partially in Puerto Rico, where he was born, and partially in Houston, Texas, as his parents moved around for work. A first-generation college student, Sanchez-Nieves attended University of Puerto Rico for his undergraduate degree with the original goal to go into medicine. However, after taking a microbial physiology class and a microbial ecology class, he was enamored with the diversity of microbes, and decided to explore them further for his master’s degree, which he earned studying the biology and phylogeny of halophiles, a type of thermophile. Sanchez-Nieves described how his fascination with the intricacies of microbes made sense looking back on his upbringing:

“My dad was a mechanic, and growing up, I got to see very intricately see how cars work and what makes them work,” Sanchez-Nieves said. “I think that’s partially why I got really into the nitty gritty of biology, like molecular level. When you’re working in genetics its sort of the same thing, right? You want to see what gene is affecting a phenotype, and what happens when you remove it or change it. I think that mechanical way of thinking from my dad transferred over to my interests in biology of microbes.”

His current graduate research looks at mobile genetic elements, otherwise known as plasmids, in Solfolobus Islandicus, a species of thermophile that can exist in incredibly hot and acidic conditions. Sanchez-Nieves’ research involves sequencing and characterizing plasmids produced by S. Islandicus, as well as determining recombination frequencies in the chromosomes associated with the produced plasmids. However, these microbes can only be found in extreme environments, so to collect them, the Whitaker lab takes a yearly trip to Yellowstone National Park to the hot springs the microbes live in. Sanchez-Nieves described the thrill of these trips to collect the microbes:

“It’s that border between cool and scary,” Sanchez-Nieves described. “We go off trails to get to the hot springs, and it’s awesome to see, just, raw nature. We often see bugling elks nearby because we go during their mating season, and sometimes we have to turn back if they’re aggressive. But the camaraderie of everyone when we go, being in the mountains together...it’s one of my favorite places to be.”

In 2021, after deciding that he wanted to pursue an industry career path, Sanchez-Nieves participated in the Kleinmuntz Center’s Young Innovator Program. “I wanted to get more into manufacturing and synthetic biology and combine that with genomics in thermophiles.” Sanchez-Nieves said. Young Innovators is a professional development program that aims to train graduate students and postdoctoral staff on how to communicate science, and design projects that are innovative and profitable. Sanchez-Nieves proposed a project to modify thermophiles, like S. Islandicus, to be used for different manufacturing purposes. One example would be extracting starch from crops, since the hydrolysis process happens at high temperatures that thermophiles can withstand. The benefit of using thermophiles for manufacturing is that the intense conditions the microbes would be grown in would help prevent contamination, something that is difficult to prevent via other means of production. Though his project was ultimately not chosen as one of the three to be funded, Sanchez-Nieves described how the program still helped give him skills essential for his career ambitions:

“The program gave me experience with business acumen and learning what matters more in academia, where you go a lot into theoretical, versus business, where you have to have a purpose to what you’re saying. So, it was nice to get an idea of what science in the business world looks like.”

Sanchez-Nieves plans to finish up this spring/summer, and would like to work in biotechnology or synthetic biology, making microbial products for manufacturing or medicinal purposes. When not conducting research, Sanchez-Nieves says he enjoys going on hikes and cooking tasty dishes with his fiancé. He and his fiancé also follow Christianity, which he says is an essential part of their lives. “Having that spiritual component has been key to getting through the toughest moments, and helps me live each day grounded and focused on the things that matter most to me.” Sanchez-Nieves said.

Sanchez-Nieves lives by the poem “If” by Rudyard Kipling, in which a father talks to his son about living a life based on integrity, composure, humility, and most of all, living it to the fullest:

“If you can fill the unforgiving minute
With sixty seconds’ worth of distance run,
Yours is the Earth and everything that’s in it, And – which is more – you’ll be a Man, my son!”

—Final stanza of If by Rudyard Kipling