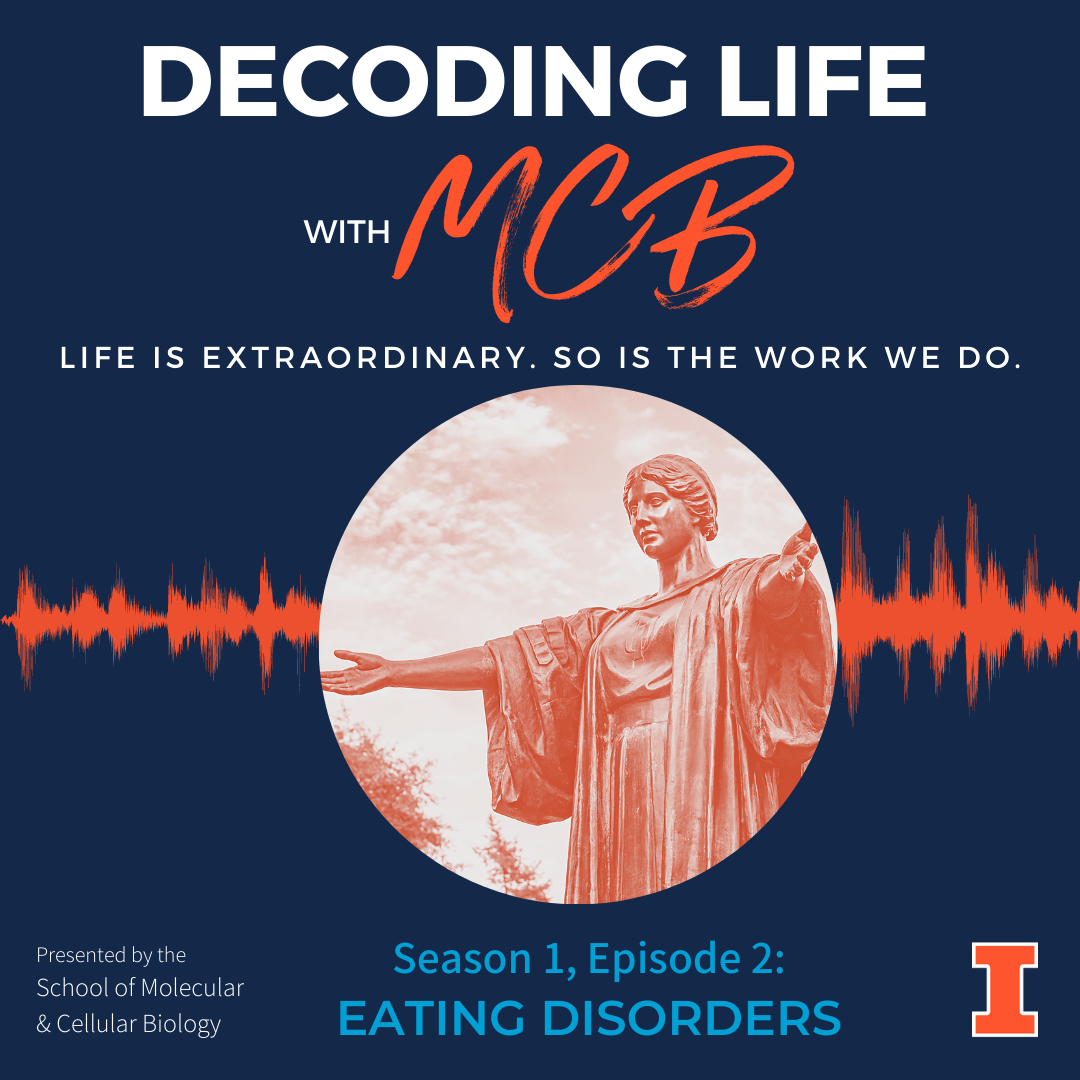 Dr. Patrick Sweeney, a professor in the Department of Molecular and Integrative Physiology at the University of Illinois Urbana-Champaign, joins Decoding Life with MCB to discuss his lab's efforts to understand the biology behind eating disorders. MCB also sits down with the UIUC Counseling Center's Dr. Michelle LeMay, a clinical counselor, and PhD student Katie Rhoades. They talk with Decoding Life about recognizing the signs that a loved one might be battling an eating disorder and ways to better understand what they're going through.

SWEENEY: The fact that patients with this disorder can override that entire system and ultimately voluntarily decide not to eat is one of the most significant unanswered questions, I think, in the field…

LASK: From signs and symptoms, to stigmas and solutions, learn what steps researchers at the University of Illinois are taking to address eating disorders' biggest mysteries. You're listening to Decoding Life with MCB. Thanks for listening to Decoding Life. I'm your host, Jen Lask, with the School of Molecular and Cellular Biology at the University of Illinois Urbana-Champaign. In our latest episode, we're talking with Dr. Patrick Sweeney, a professor of molecular and integrative physiology, who's studying the neural circuits in the brain that regulate feeding. We're also bringing in Dr. Michelle LeMay, a clinical counselor, and PhD student Katie Rhoades from the university's counseling center to talk more about recognizing the signs that a loved one might be battling an eating disorder, and ways to better understand what they're going through. People who suffer from anorexia nervosa often restrict their eating to extreme levels, experience distorted body image and low self-esteem, and can become dangerously underweight. That can lead to serious illnesses, such as heart disease, osteoporosis, and even death. It's a disease that's difficult to talk about and can carry stigmas. You've probably heard the stereotypes that someone might choose to starve themselves or binge and purge. But as Sweeney explains, an eating disorder is a medical illness, and his team is exploring the inner workings of our brain to better understand this complex disorder.

SWEENEY We do a lot of basic neural circuitry trying to understand what brain regions stimulate feeding and what brain regions suppress feeding. And our work in relation to anorexia nervosa is really focused on trying to identify circuits in the brain that suppress food intake, and are also activated by stressful stimuli or stimuli associated with anxiety. And the reason for this is because anorexia nervosa is a disorder sort of characterized by both feeding deficits so suppression of food intake and lower body weight. But in addition to that, there's a number of co-morbid neuropsychiatric conditions usually associated like increased anxiety, and depressive related behaviors. So we're really focused on trying to understand the basic circuitry in the brain that regulates both feeding and anxiety and depression.

LASK: According to the National Institutes of Mental Health, roughly 2.7% of teens ages 13-18 will develop an eating disorder. Among adults, 0.6% will battle anorexia nervosa in their lifetime. While the rates of EDs among women are higher, Sweeney says studies are showing male cases could be underreported. His lab is trying to figure out how the neural circuitry involved in feeding is altered in pathological conditions. To do so, they're focusing on the central melancortin system, which is believed to be an important neuronal pathway regulating food intake.

SWEENEY: For me, as a basic scientist, you know, I understand now that feeding is one of the most fundamental needs that we have, and the circuits in the brain are extremely well conserved, to ensure that you eat, to ensure that you maintain a sufficient amount of energy. And the fact that patients with this disorder can override that entire system and ultimately voluntarily decide not to eat is one of the most significant unanswered questions, I think, in the field, and in science, in general, is how, how are individuals able to override that basic instinct, that even in preclinical animal models, even in mice, you know, they have a very well conserved circuitry that prevents them from losing weight prevents, them from not eating.

SWEENEY: In undergraduate in college, I got involved in research in a lab that was focused on from a psychiatrist who was studying anorexia nervosa. But she also had a basic neuroscience laboratory. So she was doing a number of experiments looking at neural circuits at the interface of feeding and anxiety, so that’s when I first sort of got interested in it. And in my PhD work, I kept studying sort of the neural circuits of feeling and emotion. And I've really continued along that path.

SWEENEY: As a basic scientist, feeding behaviors really is a great assay, because it's very fundamental, it's reasonably easy to study in animals. And many of the feeding circuits are very well conserved. So a lot of these circuits, a lot of these hypothalamic circuits, they're ancient brain structures, and the circuitry is well conserved from humans all the way even to fish, for example. So it's a really nice circuitry to try to understand the basic biology of a very fundamental behavior.

LASK: It's a basic biology with complex outcomes. Across campus from Professor Sweeney's lab, staff at the Counseling Center at UIUC are working to address eating disorders and mental health of college students every day. Counseling psychology PhD student Katie Rhoades says eating disorders are influenced by a number of different factors.

RHOADES: So messages about you know, our bodies from our family, friends, or media, especially societal expectations of our bodies, can really impact our view of ourselves. So we can be battling a lot of negative body talk and a lot of negative images. So one of the things is that we can, you know, start to practice body positivity. And that's an effort to accept all bodies as they are, regardless of shape, size, skin color, or physical abilities. And this is challenging, because we do get so many negative messages about our bodies, or what our ideal body should look like. But these ideal bodies are often unrealistic. And there's a gap between what the expected ideal body is and our own, which can cause us a lot of significant distress.

LASK: As Rhoades notes, there's a misperception that thinner bodies are inherently healthier.

RHOADES: Health is based on what you discuss with your doctor and keeping up with your sets and how you feel in your body. And in reality, that there's a lot of different ways that our bodies can be healthy. So being able to accept our bodies and not compare ourselves to others is a major shifting point in breaking stigma. And to break some of them we need to start talking about things.

LASK: Dr. Michelle LeMay is one of the co-chairs of the counseling center's eating disorders treatment and outreach team.

LEMAY: There are a few different warning signs that family members and friends should be aware of or monitoring. So those can include things like if a person is avoiding social gatherings where food is involved, or general social withdrawal. So trying to not go places where - if it's going out to dinner or something like that - and they're avoiding those sorts of situations, when previously, they would be very excited to go. Significant fluctuations in weight, whether that is weight increase or weight decrease, especially when it's combined with wearing baggy clothes. Oftentimes, people that are restricting their food tend to feel overweight, so they wear baggy clothing. Certain things like emotional discomfort after eating, or like if they are consistently leaving to use the restroom shortly after eating, frequently talking about diets or excessive exercise, whether that's things that they're wanting to do, or things that they are doing. And preoccupations are focused a lot on food or weight, or exercise. This can be something that shows up especially with social media use, whether they are following a lot more pro eating disorder people or that sort of thing.

LASK: So what should you do if a friend or family member seems to be showing those symptoms?

RHOADES: I think that you start to notice when your friends are maybe acting a little off, and it's good to check in with people just to see if 'hey, something's going on, can I provide any help or any resources?' but you can see when people are acting maybe a little bit differently than they normally wouldn't. Just checking in is always a good option. When we keep things secret, secretive or held close to ourselves, there's a shame associated with it. But we when we bring things like disordered eating and mental health concerns to light, we're actually normalizing them and can help provide help to those who need.

LEMAY: One thing I will mention is eating disorders thrive in isolation. They tend to pull that person away from those wanting to support them and give them help. So it is a really tricky thing to navigate.

LASK: Like Rhoades and LeMay, Sweeney hopes our society is starting to get past the stigmas and silence, and that his lab can be part of bringing about that change in attitude.

SWEENEY: This is a disease with a underlying neural biological mechanism, and we really should be thinking about it in much the same way as we think about other neuropsychiatric diseases as well. I hope that the stigma is getting is getting better and better and people are more willing to sort of talk about it and discuss it, but I suspect that it's probably still very underreported. I think anything we can do to advocate for the disease and its awareness is a really great thing.

LASK: MCB wants to thank Sweeney, LeMay, and Rhoades for taking the time to talk about eating disorders and mental health. If you’re a student at the U of I who may be struggling with issues related to food, the Counseling Center hosts a weekly session for others also experiencing body image issues, over-exercising, obsessions about food and weight loss, overeating, binging, purging, or restricting food. The group’s focus is not only on the exploration of eating behaviors but also on the underlying causes that sustain these eating struggles. We’ve shared the group’s contact information on our website, MCB.Illinois.EDU. We’ve also shared the National Eating Disorder Association’s helpline and other resources. Thanks for listening to our latest episode of Decoding Life with MCB. Life is extraordinary… so is the work we do.