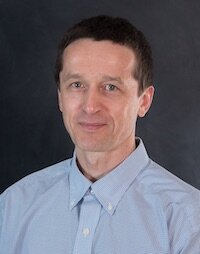 The Kuzminov Lab is looking for a talented and motivated postdoc to join our research team.

We are broadly interested in the phenomenon of Genetic Death via chromosome inactivation, — with the final objective of killing undesirable cells by undermining their genetic material. Specifically, we are interested in the chromosome lesions (DNA lesions or conditions that block the chromosome cycle), — in their formation, repair (or inability to repair) and misrepair (leading to DNA rearrangements). 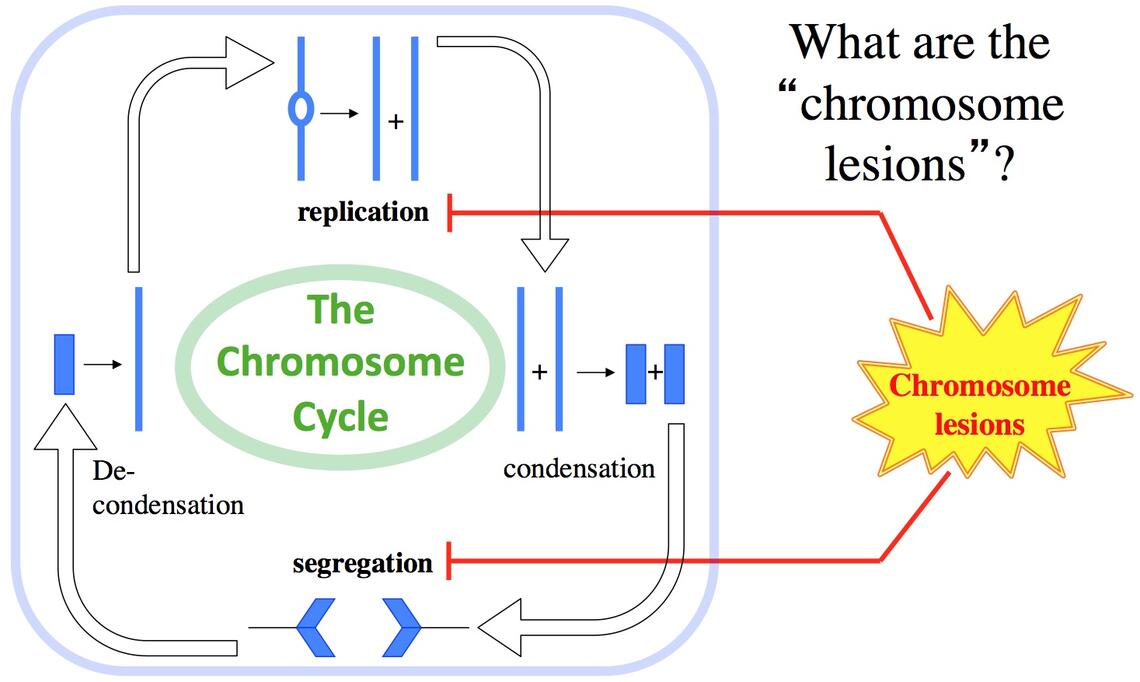 To answer our questions, we use a powerful combination of genetic, biochemical, physical and computational approaches. We do our studies in Escherichia coli, mostly for the tractability of results, but other potentially interesting microorganisms, like Deinococcus radiodurans, are always a possibility.

The thyA mutants, unable to synthesize thymidine (dT), rapidly die without thymidine supplementation. Since the bulk of dT resides in the chromosomal DNA, TLD was always considered a chromosome replication phenomenon. Indeed, stationary cells do not replicate and are resistant to TLD, so T-starvation was naturally assumed to specifically target replication forks. Various models were proposed to explain how problems at inhibited replication forks and their eventual breakage turn deadly for the chromosome.

However, we have found that cells with demonstrably no replication in their chromosomes, but otherwise normal metabolism, are fully sensitive to TLD, indicating a very different mechanism of cell killing. Recently, we have also found that chromosome fragmentation during thymidine starvation can be completely suppressed without any influence on TLD kinetics. Thus, the two major chromosomal processes of the previous TLD models, replication and fragmentation, turn out to have no role in TLD. New TLD models need to be formulated.

We have also discovered a substantial pool of low-molecular weight (LMW) dT in the cell. A lot is still unknown about it: — The composition of this LMW-dT pool; — The main enzymes pumping free dT into it, as well as out of it; — The major processes (besides DNA replication) that tap into this LMW-dT pool. In the mutants unable to recruit free dT from this LMW-dT pool, we observe dT-hyperstarvation, reflected in the unusually fast thymineless death, which is associated with two additional striking phenomena: 1) rapid loss of the chromosomal DNA, again independently of its replication; 2) severe cytoplasm instability and/or cell envelope disintegration. 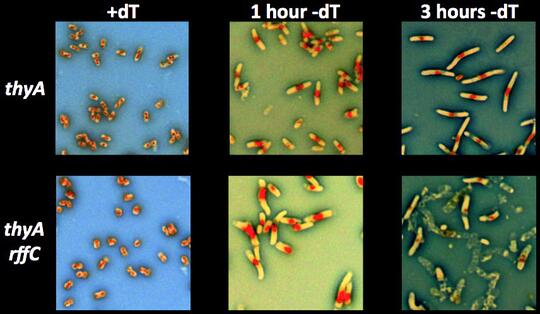 This means that, in addition to chromosomal DNA replication (and integrity, as it turns out), dT is also used to support cytoplasm or envelope integrity. We are working on figuring out whether the chromosomal problems in this mutant during dT-starvation develop independently, precede or are caused by the cytoplasm/envelope problems.

In general, identification of the considerable LMW-dT pool inside the cell revealed the second dimension of the thymineless death phenomenon, with multiple future research venues.

Hydrogen peroxide (HP) is an unusual molecule in that it is inert against typical organic molecules, like proteins or nucleic acids (for example, it is stable in plastic containers for years), but at the same time kills any kind of cell on contact. Its extreme life-directed reactivity is explained by transition metals, especially iron, which are always present in cells and readily donate electrons to HP. The extra electrons split HP molecule, generating hydroxyl radicals, — the most reactive chemicals that could be made inside the cell. This is exactly how HP is used by our leukocytes to kill invading microbes.

One phenomenon that partially explains the puzzling efficiency of the extremely low HP concentrations in vivo is potentiation of HP toxicity by co-treatment with other simple chemicals, like nitric oxide (NO). Leukocytes are known to pump NO into the phagosome, but the exact mechanisms of how HP+NO treatment kills bacterial cells is not known. One intriguing discovery that we have made in HP+NO-treated bacteria is the so-called "catastrophic chromosome fragmentation", when the bacterial chromosome suffers 100-1,000 double-strand DNA breaks and becomes irreparable. 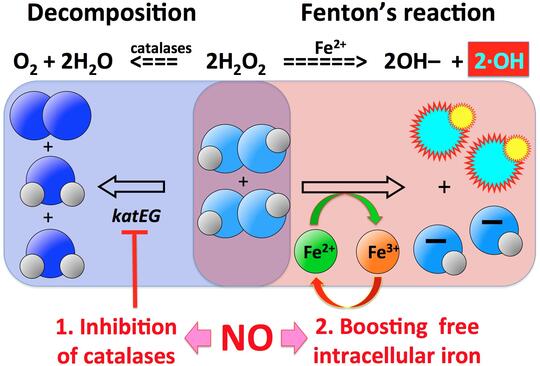 Our major questions in this project are: — What is the nature of these multiple HP+NO-induced double-strand DNA breaks? — What is the source of reduced iron to generate enough hydroxyl radicals for catastrophic chromosome fragmentation? — How much is the inhibition of HP scavenging involved in potentiation? — What is the specific role of NO in both iron recruitment and in inhibition of HP scavenging? — Are there any other treatments (simple chemicals, ambient conditions) that synergize with HP treatment?

Our current results allow us to be optimistic about eventually being able to explain the dramatic differences between the bactericidal HP concentrations in cell cultures versus phagosomes of leukocytes.

The main contamination of DNA turns out to be RNA, and not only single ribonucleotides occasionally misincorporated in the DNA chains, but also RNA transcripts that hybridize back with their duplex DNA templates, forming R-loops in which RNA strands have no covalent linkages to DNA strands. The cell does not tolerate either type of RNA presence in the DNA, removing RNA residues with specialized enzymes, RNases H. Every cell has a dedicated RNase H to remove single DNA-rNs, as well as (usually) another dedicated RNase H to remove R-loops. Although the two RNase H substrates are very different, and single mutants in one or the other RNase H display no or modest growth defects, the mutant lacking both enzymes is grossly inhibited. The reason for this synergy between the two RNase H defects is currently unknown. We have found that the double RNase H-deficient mutants form filamentous cells filled with DNA, whose survival depends on recombinational repair, suggesting formation of chromosomal lesions and the inability to repair some of them faithfully. The nature of these so-called R-lesions (RNA-containing chromosome lesions) is completely unknown, although it is clear that they start with formation of R-loops. 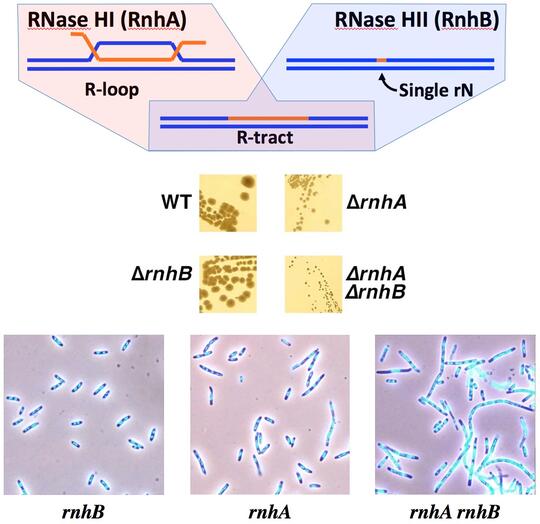 We have speculated that these chromosomal lesions could be R-tracts (DNA duplexes with extended ribonucleotide runs, incorporated in one of the strands). However, currently we are unable to detect these R-tracts in the genomic DNA of the RNase H-deficient mutants. There could be two explanations for our frustration: 1) there are too few of R-tracts per chromosome, so our detection protocols simply lack sensitivity; 2) the R-lesions are not R-tracts, but something else. We address the challenge of R-lesion detection with two complementary approaches: 1) by screening for mutants that depend on the RNase H for viability (so-called "synthetic lethals" with RNase H inactivation); 2) by finding treatments that kill RNase H-deficient mutants. In both cases, we hope to find conditions (either genetic defects or treatments) that amplify R-lesions, — which will facilitate their detection. In other words, under these conditions, we should either start detecting R-tracts or should detect something else that kills RNase H mutants, — revealing alternative R-lesions.

Our newly-developed ability to separate the leading strand RIs from the lagging strand RIs opens up possibilities to explore the regulation of either species, separately. For example, we are in a position to ask what determines the frequency of the periodic re-priming on the leading strand, testing such mutants or conditions as: 1) replication-blocking DNA lesions; 2) defects or overproduction of the major nucleoid-associated proteins; 3) topoisomerase defects; 4) the copy number of primase. We are also planning to inquire into what determines the cadence of primase on the lagging strand, by measuring the length of Okazaki fragments in: 1) the various primase mutants, as well as under- and over-expressing constructs; 2) mutants in single-strand DNA-binding (SSB) protein; 3) mutants in the HolC and HolD subunits of the replisome, which are considered to be responsible for managing SSB on the single-strand DNA at the replication fork. Replication intermediates in vivo may finally yield their mechanistic secrets!

Our publications in the last five years:

Kuzminov A (2018) When DNA Topology Turns Deadly - RNA Polymerases Dig in Their R-Loops to Stand Their Ground: New Positive and Negative (Super)Twists in the Replication-Transcription Conflict. Trends Genet. 34: 111-120. PMID: 29179918