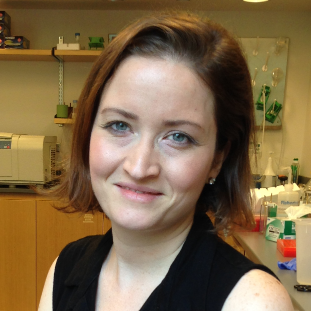 A recent study by a team of researchers at the University of Illinois Urbana-Champaign has discovered a unique immune system in bacteria composed of a single enzyme that destroys a broad range of bacterial viruses (known as phages).

“The discovery was made possible by our ongoing efforts to find and characterize new phages,” said Asma Hatoum-Aslan, assistant professor of microbiology and corresponding author of the paper describing the research, which was published in Cell Host & Microbe. “Every new phage that we find is a new tool that we can leverage to probe and understand the immune systems in the bacteria that they infect.”

Hatoum-Aslan has been studying anti-phage defenses in Staphylococcus bacteria for several years. This particular research journey began with a trip to the wastewater treatment plant of Tuscaloosa, AL with members of her former lab at the University of Alabama. “Wastewater is a rich source of staphylococcal phage,” explains Hatoum-Aslan. “Back in 2015, a group of undergraduates collected a small wastewater sample from which we were able to isolate four phages that eventually enabled this whole study.”

Hatoum-Aslan and her team of researchers, including several undergraduate students, discovered the lethal effects of a single enzyme (referred to as Nhi – nuclease-helicase immunity) against diverse staphylococcal phages and prevent them from overwhelming cells that have lost all other known defenses. The team used Staphylococcus epidermidis as a model organism, which is commonly found on human skin.

Hatoum-Aslan’s lab determined that Nhi can unwind double-stranded DNA and degrade it. The team found it noteworthy that Nhi doesn’t appear to be causing cell death at all, which is a common defense strategy used in bacteria. While bacterial immune systems are typically more complex and rely upon the activities of multiple enzymes, Nhi is unique in that it works on its own. Another feature of the enzyme that is remarkable is its broad range of activity against different kinds of phages. “Genetically speaking, two phages can be as different from one another as hippos are from whales,” Hatoum-Aslan says. “We were surprised to find that Nhi can protect against a large group of phages in our collection despite their vast genetic differences.”

The discovery that Nhi can protect against the three most common categories of phages based on morphology, has opened the door to more intriguing questions--How does Nhi specifically target phage DNA without damaging its own cell’s genetic information? In other words, what is the common element that Nhi recognizes within the three phage types? Hatoum-Aslan says her lab is on the way to answering those questions. The lab conducted genetic and comparative analyses of the phages, and narrowed their search for commonality down to the single-stranded DNA-binding protein that’s critical for phage replication.

Hatoum-Aslan says there’s more work to be done when it comes to understanding how the immune system can correctly target phages while avoiding damaging cellular DNA, drawing parallels to auto-immune diseases in humans, in which the immune system mistakenly identifies itself as foreign.

Hatoum-Aslan’s lab also works to understand how CRISPR-Cas immune systems function. These systems use small RNAs and CRISPR-Associated (Cas) nucleases to detect and destroy phage invaders. Her lab focuses on Type III systems which are considered the most complex.

“The Type III CRISPR-Cas system in Staphylococcus epidermidis relies upon nine separate proteins with nuclease and other activities,” Hatoum-Aslan explains. “Our recent research has uncovered another layer of complexity—it relies upon at least three other nucleases inside the cell that are typically dedicated to ‘housekeeping’ functions. It’s almost like the militia being called to action when the borders are breached, and farmers are on the front lines with their pitchforks, protecting their land,” she says. “In a similar fashion, this CRISPR system has evolved to recruit non-Cas housekeeping nucleases to the scene of the infection, and basically channel their destructive activities towards the phage.”

While her team is particularly focused on anti-phage immune systems in Staphylococcus epidermidis, the professor acknowledges the importance of studying a wide range of other non-model organisms. “What we do is very complementary to ongoing efforts by others in the field who are hunting for new defense systems” Hatoum-Aslan concludes. “Collective efforts over the past five years have made extraordinary strides towards understanding the diversity of the different immune systems in bacteria and how they operate. Just like the discovery of CRISPR-Cas systems has led to a plethora of new technologies and revolutionized genetics research and medicine, these new systems have the potential to inspire novel biotechnologies and therapeutics.”